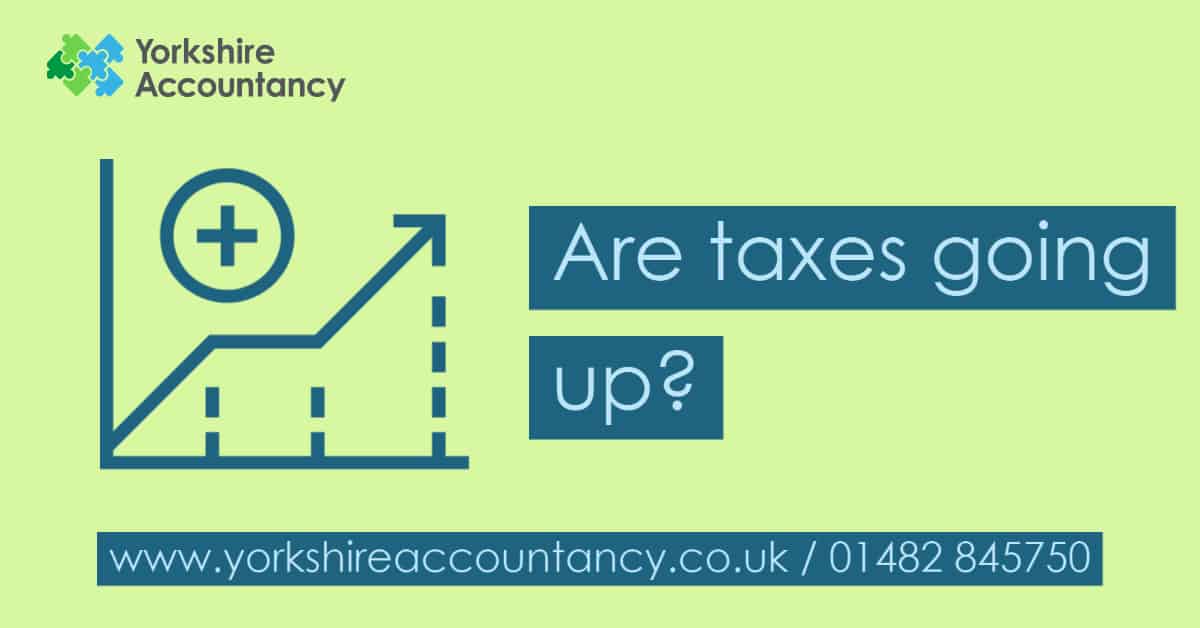 Are UK Taxes Going Up?

The UK Government has provided a range of financial packages to support businesses, employees and self-employed workers affected by the COVID-19 pandemic. These financial support packages have been mostly well-received and helped the UK economy, despite entering another recession.

When the support was announced, it was greeted with murmurs that all the money paid out would have to be paid back in the future. Even the chancellor himself stated during a press conference announcing the SEISS that it “will have to be paid back at some point”. So, now that these packages are coming to an end, those rumours have gathered pace.

So, what UK taxes are expected to be increased – and who is going to have to pay the most?

Will Income Tax Be Increased?

The good news for the general population is that there have been no reports that income tax will increase. The current tax bands ask people to pay either 20% or 40% of their taxable income and that is not rumoured to increase and the tax-free allowance of £12,500 will remain the same. Although there is no guarantee that this will change over time.

Instead, the money spent on supporting the economy is going to be mostly paid back by businesses it predominantly helped.

Which UK Taxes Are Increasing?

The government is expected to announce rises on Capital Gains Tax (CGT) and Corporation Tax. The former is the type of taxation that will affect more of the UK population, albeit most of those significantly affected would be already wealthier than the average brit.

Corporation tax is the other type of tax expected to be increased, and the type of tax that limited companies must pay. The UK currently enjoys one of the lowest corporation tax rates in Europe, sitting at just 19%. However, the current UK Government are tipped to increase this by 5% to 24%.

The Labour Party has pushed for an increase on Corporation Tax for some time and are known to want to raise it further still to 26%.

Interestingly, foreign companies with an office in the UK must also pay Corporation Tax and any increase could make the UK less of an appealing territory to grow into.

Are There Any Mitigating Strategies?

Although there is nothing you can do to not pay the rate of tax set by the government, there are ways to plan your business and your tax for the most advantageous position. Capital Gains Tax may be mitigated by using your full allowance and combining it with your spouse’s allowance. Moreover, rises in Corporation tax could mean you can save on your tax bill by restructuring your current company and payments.

The exact mitigating strategies will entirely depend on your specific situation. Thus, it is best to speak to professional UK accountants for help. Paying for their services could save you money year on year.

If Corporation Tax does increase by 5%, this may not be the case anymore. Again, the best accountants will be able to guide you towards the most advantageous position.

When Will We Know About UK Tax Increases for Certain?

We will be able to squash the rumours and deal with facts as soon as the UK Government announces its Autumn 2020 Budget. At the time of writing, there is no known date for the Autumn Budget announcement, but it is expected at some time in October.

Once these tax changes are announced, UK accountants can provide clearer solutions to individual tax questions and wealth planning.

If you have a question about any pending tax hikes or other accountancy queries, do not hesitate to contact Yorkshire Accountancy. Our friendly team of experienced UK accountants are on hand to help with all your tax affairs.

From pondering a limited company to VAT and Corporation Tax, we are here to help you take up the most advantageous position. Speak with us, today!