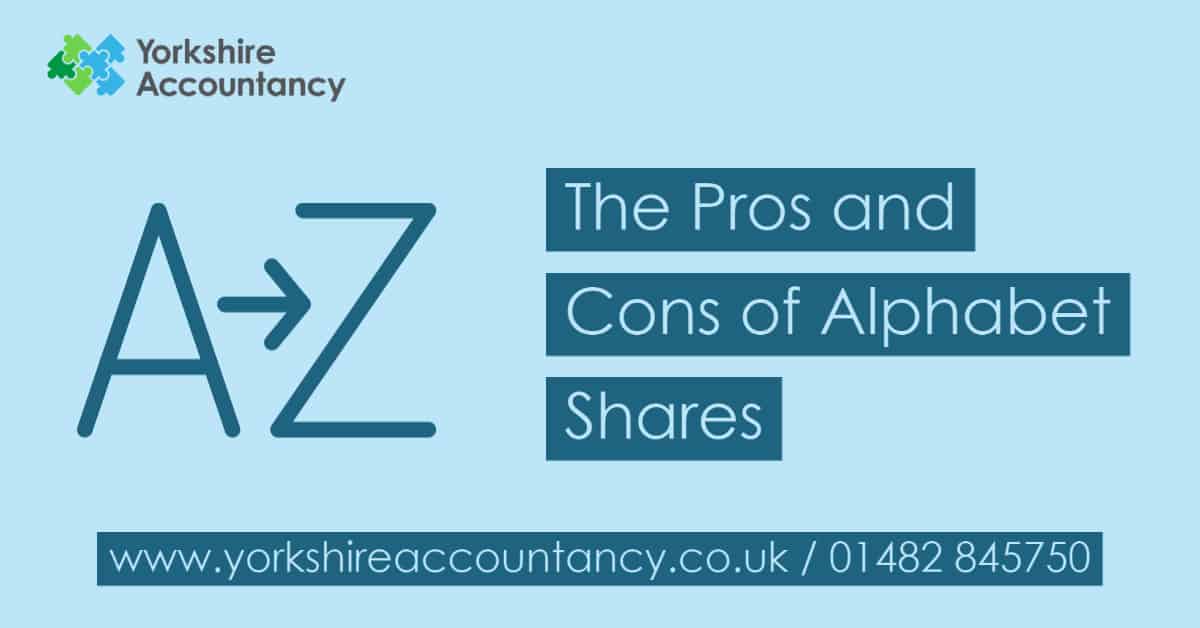 The Pros and Cons of Alphabet Shares

Alphabet shares is an efficient way of classifying different types of shares.

Split into different groups described as Class A shares, Class B shares, Class C shares and so on, it’s possible to separate shareholders. This can be imperative for the payment of shares at the correct rate and enables a company to manage the process effectively.

Alphabet shares are an easy way to pay dividends at different levels but they don’t usually have any other importance. All types of alphabet shares typically have the same ranking, with all usually having identical voting and company rights.

The use of alphabet shares enables a company to be able to differentiate between payments, allowing a dividend payout to be made without every shareholder receiving the same sum. This could be beneficial if there are differing tax obligations among the shareholders.

In some circumstances, alphabet shares may provide a different entitlement. The class allows them to be defined separately from ordinary shares which may be necessary if you want to restrict voting rights at AGMs, for example.

Alphabet shares can also be given to employees as a structured part of their remuneration package. This may be preferable for some, as it’s a tax-efficient form of payment and can also be provided as an incentive. When given to employees, alphabet shares are typically non-voting and only redeemable at a like-for-like value. This makes it simpler for the shares to be returned if the employee leaves the company.

Dividends can be a contentious area for HMRC who may try to insist that the payment is a type of salary and not the intended return on capital. This is because salary payments, unlike true dividends, are subject to PAYE tax and NIC.

John and Helen are both company shareholders. The only fee earner is John and due to other investment income, he’s liable to pay a higher rate tax. His wife, Helen, is a basic rate taxpayer. John does not draw a salary and holds 50 Class A shares which don’t provide him with an entitlement to a dividend. Helen holds 50 Class B shares and is entitled to payment of dividends.

Using the above theoretical case, it’s possible that HMRC could seek to use the settlements legislation to challenge the dividend payment, refusing the transferral to Helen and away from John. This is because they view the redistributed profits as “employment rewards” which should be subject to PAYE and NIC.

In a company where funds are channelled away from the fee earner and to another person to achieve a tax advantage, it may be deemed to be a settlement. HMRC legislation (ITTOIA 2005, Pt 5, Ch 5) describes a settlement as:

“[…]any disposition, trust, covenant, agreement, arrangement or transfer of assets”

It can be seen how a transferral of income from the fee earner to a lower rate taxpayer may be seen to meet the definition of a settlement. The legislation is designed to act as a deterrent to tax-avoidance, preventing income from being diverted elsewhere to sidestep tax payments.

HMRC have sought to use this legislation on several cases, most notably Garnett v Jones [2007] UKHL 35, and more commonly referred to as the Arctic Systems case.

In Garnett v Jones, Mr Jones was the sole fee earning in the company but both husband and wife were shareholders, holding equal rank. When they set up the business, Arctic Systems Ltd, they each were given one share.

The House of Lords ruled that this was sufficient for a settlement to have been established but agreed that an exception to the tax-avoidance provisions in law applied. This was because it was viewed as an outright gift, rather than wholly a right to income. On this basis, Mrs Jones was permitted to receive the dividends as her income only.

The settlement rules may also be applied by HMRC if dividend payments are only payable to one particular class if other classes receive little or no payment. This is known as a “bounteous payment” and is liable to an HMRC challenge under the settlement legislation.

It’s therefore vital to ensure that any alphabet shares are structured with due regard to all legislation. Failure to do so may result in a loss if challenged by HMRC, as in HMRC v PA Holdings Ltd [2011] EWCA Civ 1414.

The transfer of alphabet shares is allowable as a transfer between spouses, providing the gift is made on a no gain/no loss value. This provision is made on the basis that the two parties are co-habiting. This is allowed under TCGA 1992, s 58(1).

How We Can Help

There are ways to protect alphabet shares, such as structuring the dividends to ensure all classes of shares are entitled to payment.

For more technical advice and help on alphabet shares, get in touch with the experts here at Yorkshire Accountancy today.

Do I have to pay staff for new bank holidays?